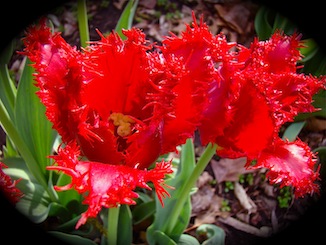 Protestant Reformers G includes links to three editions of the Geneva Bible, which was first published in 1560, in Geneva, Switzerland. The following quote is from a note included on the online copy of the 1st edition.

This Bible was also significant because it was, for the first time mechanically printed. Being mass produced, it was directly made available to the general public. Its study guide, maps, tables, indexed, and illustrations provided a Bible that could be used by the common person.

It is interesting to note that the persecution suffered under Queen Mary brought many Biblical scholars together in Geneva allowing them to become involved in this new translation under the guidance of William Whittingham, who completed and published the New Testament in 1557, followed by the complete Bible in 1560. In the end, over 150 editions were issued! It would be over 50 years until the Geneva Bible would be replaced in popularity by the King James Version of the Bible.