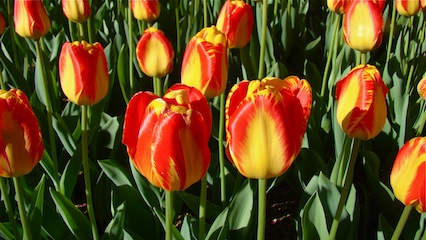 Going Where? The crowds were truly confused by Jesus words when He told them that in a little while I will be leaving you. What could Jesus mean by these words? Was he going to leave them and go to teach the Greeks?

31 And many of the people believed in Him, and said, “When the Christ comes, will He do more signs than these which thisMan has done?"

32 The Pharisees heard the crowd murmuring these things concerning Him, and the Pharisees and the chief priests sent officers to take Him. 33 Then Jesus said to them,“I shall be with you a little while longer, and then I go to Him who sent Me. 34 You will seek Me and not find Me, and where I am you cannot come.”

Going Where? The crowds were truly confused by Jesus words when He told them that in a little while I will be leaving you. What could Jesus mean by these words? Was he going to leave them and go to teach the Greeks?

Was there ever a person who was more misunderstood? The difficulty is that the people just could not wrap their minds around the fact that Jesus was actually who He proclaimed to be! He was the Son of God; God the Father was and is, indeed, His Father. So many things would have been more clear to them, but their unbelief simply did not allow them to understand His words.

Do we have the same problem in the 21st century? Could it be that our own unbelief keeps us from understanding the truth of God's Word? Jesus said that is we had faith as small as a grain of mustard seed, we could move mountains, but without faith, we can do nothing!

Do you ever wonder why people read the Bible, but just do not understand the truths proclaimed within its pages? The Bible is a living book--the living Word of God! As believers, the Holy Spirit lives within our hearts teaching us and instructing us. However, without the Holy Spirit, the Bible just becomes a book with so many words. Inconsistencies seem to spring up from out of nowhere!

The people responded to Jesus words by asking, "Going where? Where is Jesus going?" They did not understand that He was explaining to them that His time on this earth would be coming to an end very shortly. Jesus had one purpose for coming to this earth--He came to this earth that through His death and resurrection, He would provide life for all who come to Him. It was necessary that He die so that He might grant to us life--eternal life forever with Him.

Many came to Christ and accepted His payment for their sins while He lived on this earth, but many more have come to Christ after He returned to heaven.

Is Jesus dead today? No! Jesus only remained in the grave for three days, after which time He was raised again from the dead. After appearing with his disciples for a few months, He was resurrected right before their eyes, with a promise that He would come again.

Today, Christ is in heaven sitting beside God the Father, making intercession for us. Now is the time. Now is the day of salvation. Let us go to Christ before it is too late. The day will come when Christ will return and gather all of His people, first the dead, and then the living to Himself. So shall we ever be with the Lord!