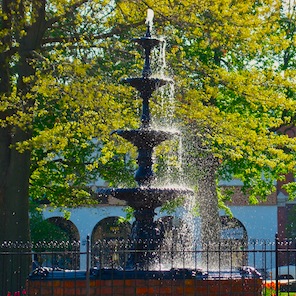 Jesus promised to the people rivers of living water. How could that be? To what was Jesus referring? This promise is still valid to us today in the 21st century!

37 In the last day, that great day of the feast, Jesus stood and cried, saying, If any man thirst, let him come unto me, and drink.
38 He that believeth on me, as the scripture hath said, out of his belly shall flow rivers of living water.
39 (But this spake he of the Spirit, which they that believe on him should receive: for the Holy Ghost was not yet given; because that Jesus was not yet glorified.)
40 Many of the people therefore, when they heard this saying, said, Of a truth this is the Prophet.
41 Others said, This is the Christ. But some said, Shall Christ come out of Galilee?
42 Hath not the scripture said, That Christ cometh of the seed of David, and out of the town of Bethlehem, where David was?
43 So there was a division among the people because of him.
44 And some of them would have taken him; but no man laid hands on him.
(John 7:37-44, King James Version)

Jesus stood and cried, saying, If any man thirst, let him come unto me, and drink. He that believeth on me, as the scripture hath said, out of his belly shall flow rivers of living water.

Thirst! I am sure most of us have experienced a time when we feel as though we will die without a drink of water. Jesus is the water of life; he that believes on Him will never thirst again. Why is that true? It is true because Jesus sent the Holy Spirit to dwell within the hearts of unbelievers.

If we quench the Holy Spirit, it does lead to a temporary thirst again, but He is still there. We are never removed from God, as Christians. Sin may quench the Spirit, but when that sin is confessed and forsaken, the fountains of Christ will again burst forth.

When I consider the plan of God, I am speechless! I cannot comprehend a God who would do so much for a people so undeserving as are we. God sent His Son to die for a people who have no righteousness of their own, and then, He fills these new believers with the Spirit of God, so that He is always with them, guiding and protecting them from the ever-present forces of darkness.

Jesus' message is always the same--He, as the perfect Son of God and Son of Man, provides the only hope for a restored communication with God of All Gods. Christ, our King, ever reigns at the right-hand of God continually making intercession for us.

Go to the rivers of living water today. Drink, so that you will never thirst again!