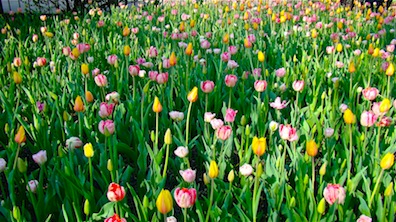 If you have ever been called upon to give a testimony of your belief in Christ, you know that it can be a scary thought. John 4 tells about a Samaritan woman who, in her great excitement, rushed to all of her friends and neighbors with her testimony of what great things she heard from Jesus, the Messiah.

39 And many of the Samaritans of that city believed on him for the saying of the woman, which testified, He told me all that ever I did. 40 So when the Samaritans were come unto him, they besought him that he would tarry with them: and he abode there two days. 41 And many more believed because of his own word; 42 And said unto the woman, Now we believe, not because of thy saying: for we have heard him ourselves, and know that this is indeed the Christ, the Saviour of the world.
(John 4:39-42, King James Version)

John 4:39 returns to the woman at the well. If you will remember, she left Jesus to tell her friends and neighbors that she had found the Messiah. Many of the Samaritans responded to the woman when she told them, He told me all that I ever did. After such a testimony, the Samaritans flocked to meet Jesus.

Jesus, at the insistence of the Samaritans, stayed with them for two days, during which time many more believed. They said to the woman, Now we believe, not because of thy saying: for we have heard him ourselves, and know that this is indeed the Christ, the Saviour of the world.

We are already seeing in the early ministry of the Lord, that His message was often rejected by the religious Jews, and yet accepted by the outcasts. Jews would not even speak to Samaritans, much less try to convert them, and yet the Samaritans opened their hearts to Christ.

Do you think it was an accident that Jesus sat down at this well and conversed with this Samaritan woman? No, this was planned before time began! When the Samaritan woman came to the well, Jesus looked upon her and saw a heart ready to receive Him.

It is interesting to note that Jesus is already beginning to reveal, in John 4, that His salvation is not just for the Jews. The apostles struggled with this idea in the years of the early church, but God revealed to Paul and to Peter, that Jesus' death and resurrection was for the entire world. As a matter of fact, when Jesus was resurrected, he told his disciples to go into all the world and preach the Gospel.

Sometimes we are afraid to reveal our Christianity because we are afraid that people will ask us questions that we are unable to answer. Does God require witnesses for Him to have divinity degrees? No! We come to God as we are, and as we live a life devoted to Him, His light will shine through us.

Pray that God will bring you closer and closer to Him, so that the zeal you once experienced as a new Christian will stay with you throughout your entire life. Is that possible? Oh yes, it is! Nothing brings more peace and joy than sharing a close relationship with the Lord Jesus Christ, and through that vibrant life with Him demonstrating a testimony of your great love for Him, others, too, will come to know Him.