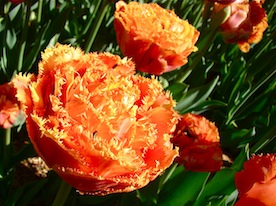 "Believe on the Son of God," John the Baptist exhorted his followers in this, one of the longest discourses given to us by John. If there was any doubt among his followers as to who was really the Christ, John laid those uncertainties to rest.

25 Then there arose a question between some of John's disciples and the Jews about purifying. 26 And they came unto John, and said unto him, Rabbi, he that was with thee beyond Jordan, to whom thou barest witness, behold, the same baptizeth, and all men come to him. 27 John answered and said, A man can receive nothing, except it be given him from heaven. 28 Ye yourselves bear me witness, that I said, I am not the Christ, but that I am sent before him. 29 He that hath the bride is the bridegroom: but the friend of the bridegroom, which standeth and heareth him, rejoiceth greatly because of the bridegroom's voice: this my joy therefore is fulfilled. 30 He must increase, but I must decrease. 31 He that cometh from above is above all: he that is of the earth is earthly, and speaketh of the earth: he that cometh from heaven is above all. 32 And what he hath seen and heard, that he testifieth; and no man receiveth his testimony. 33 He that hath received his testimony hath set to his seal that God is true. 34 For he whom God hath sent speaketh the words of God: for God giveth not the Spirit by measure unto him. 35 The Father loveth the Son, and hath given all things into his hand. 36 He that believeth on the Son hath everlasting life: and he that believeth not the Son shall not see life; but the wrath of God abideth on him.

This is perhaps one of the longest discourses of John the Baptist. If there was any doubt as to who is really the Christ, John lays those uncertainties to rest.

His disciples came to him and said, "The man you bore witness of is baptizing, and men are coming to Him."

I am sure John must have looked at them in surprise. "That is what I have been trying to tell you." I only came to bare witness of the Christ. I am not the Christ; He is the Christ, therefore He is supposed to increase, and I am supposed to decrease."

He continued, “Don’t you understand. Only the bridegroom has the bride, but the friends of the bride have great joy when they hear the bridegroom’s voice. Therefore, I have great joy even though I am not the bridegroom.” Think about that the next time you go to a wedding reception. It is easy to see that the groom is not the only one present who is happy; the guests are happy as well.

What a lesson for us in contentment. Do not miss the statement that John the Baptist made earlier: A man can receive nothing, except it be given him from heaven. Now there is a lesson in contentment; there is no room in the heart of believers to be jealous of one another! The gifts and abilities we have are from God Himself, and are perfectly designed for us to do the work God has ordained for us to do. We were not sent to fill any one else’s shoes! John the Baptist was content to be Jesus’ messenger, sent by God to prepare the world for the coming of Christ.

For he whom God hath sent speaketh the words of God: for God giveth not the Spirit by measure unto him. The Father loveth the Son, and hath given all things into his hand. He that believeth on the Son hath everlasting life: and he that believeth not the Son shall not see life; but the wrath of God abideth on him.

These words of John the Baptist summarize his entire ministry. Jesus Christ is the Son of God! God the Father has given everything to Him. Whoever believes on the Son has everlasting life, and whoever does not believe on the Son of God shall not see life, but God's wrath abides on him.

Is this message any different today? How can it be that the large majority of people living on this earth miss this? There must be more than one way to God; right? No!

There is no other way! The only way to God is through the Lord Jesus Christ, who came to this earth in the form of man, was crucified and buried, and rose again from the dead. Why? To save a people for Himself.

Do you have life? Go to Christ who is the only way, the only truth and the only life.