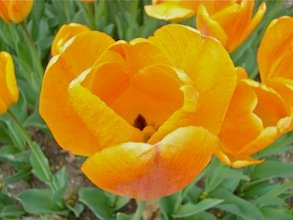 Sarai, the wife of Abram, was a barren woman. How did being barren affect a woman in these Bible times?

30 But Sarai was barren; she had no child.
31 And Terah took his son Abram and his grandson Lot, the son of Haran, and his daughter-in-law Sarai, his son Abram’s wife, and they went out with them from Ur of the Chaldeans to go to the land of Canaan; and they came to Haran and dwelt there.
32 So the days of Terah were two hundred and five years, and Terah died in Haran.
Genesis 11:30-32, New King James Version

Things were not going very well for Abram and Sarai (Abraham and Sarah). First of all, Sarai was a barren woman. In the culture in which they lived, it was considered the woman's fault if she was not able to bear children, so Sarai especially felt the stigma attached to herself.

Not only that, but her father-in-law moved the family from their home in Ur of the Chaldeans to go to the land of Canaan. This was a big deal. There were no movers or moving vans; everything had to be transported, probably by camel. So, picture this. First Sara was a barren woman, and then she is pulled from her home and forced to leave all of her friends and family, except for those in the caravan. I know that Sarah was a married woman, but she was probably still in her teens at this point in time.

Why? Why would God do such a thing to her? Why would He turn her life completely upside down, and not even give her the joy of having children?

I have learned a long time ago that God does not run His train on my tracks! God had a special purpose for both Abram and Sarai, and though they did not know it, He was already fulfilling that purpose for them by moving them away from their home country.

Is not that a great encouragement to us? Even as teens, God is working out His purpose in your life. You are not too young to serve and obey the Lord Jesus Christ. God may be taking you through some very deep valleys, but in those valleys, He never leaves you.

We are sometimes so attached to this world that we forget that this world is not our home. We are just passing through. The best is yet to come!

Think about that today. God has a purpose for your life, and He is already fulfilling that purpose through circumstances that are completely out of your control. Praise the Lord, they are not out of His control!

Next: God's Plan for Me