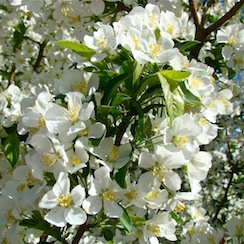 If there was one word that Sarah probably wished she could take back, it was "perhaps." Sarah made some choices that she would come to deeply regret. Impatient with God, Sarah came up with a plan. It took her no time at all to share this exciting plan with Abram.

1 Now Sarai, Abram’s wife, had borne him no children. And she had an Egyptian maidservant whose name was Hagar. 2 So Sarai said to Abram, “See now, the LORD has restrained me from bearing children. Please, go in to my maid; perhaps I shall obtain children by her.” And Abram heeded the voice of Sarai. 3 Then Sarai, Abram’s wife, took Hagar her maid, the Egyptian, and gave her to her husband Abram to be his wife, after Abram had dwelt ten years in the land of Canaan. 4 So he went in to Hagar, and she conceived. And when she saw that she had conceived, her mistress became despised in her eyes.
Genesis 16:1-4, New King James Version

If there is one word that Sarai probably wished she could take back, it was, "perhaps.

"So Sarai said to Abram, “See now, the LORD has restrained me from bearing children. Please, go in to my maid; perhaps I shall obtain children by her.”

Sarai made some choices that she would come to deeply regret. Impatient with God, Sarai came up with a plan. It took her no time at all to share this plan with Abram.

"Honey, I have not been able to have any children, but, you know, I have my Egyptian maid, Hagar. If you would go lie with her, then any child that she conceives would be considered mine."

Big mistake! We would never do such a thing, would we? When we have been praying for God to make some changes, and it seems as though He never will, what is often our course of action? We try to figure out some way in which we can answer that prayer by ourselves! Then, we convince ourselves that that is what God had intended all along. Sarai's plan backfired rather quickly. As soon as Hagar discovered that she was pregnant, she dispised her Mistress, Sarai. She was able to do something that Sarah would never be able to do, and that was to bear a child.

What a tangled mess! How was God ever going to fix it?

Thankfully, no matter what we do, we cannot interfere or prevent God from working out His own plans which He made before this world ever began. God would indeed fix the problems created by Sarai's impatience, but the scars would remain for the rest of her life.

Be careful what you do or say. If you are suddenly feeling tempted to begin to handle things your own way, because God is just not working in the way you believe He should, pray that God would prevent you from designing your own answer.

Next: Laughing at God