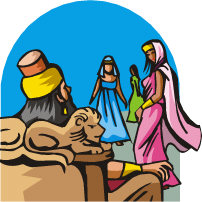 We continue our Beatitude Devotionals with Blessed are the Peacemakers. To study this Beatitude, we will go to the Old Testament book of Esther, and see the Godly Christian character she demonstrated.

Blessed are the Peacemakers, for they shall be called sons of God.
Matthew 5:9, KJV

Esther was one of the most beautiful women in the Bible. As a matter of fact, she was so beautiful, that the Persian King, Ahasuerus chose Esther out of all of the most beautiful women of the land to be his queen. Esther had been an orphan, who had been raised by her cousin, Mordecai, who was a servant of the king. After Esther became queen, Mordecai would come and sit in the king’s gate, so he could see how Esther was doing. One day, while sitting there, he heard two men who were planning on killing King Ahasuerus. Mordecai told Esther of the plot, and she told King Ahaseurus in Mordecai’s name. We can already begin to see how Mordecai was one of the Peacemakers.

After that the king promoted a man by the name of Haman to be above all the princes who were with him. All of the king servants were to bow to Haman when he walked by. Because Mordecai was a Christian, he would not bow down to Haman when he went by. Mordecai would only bow to God.

Haman, who was not one of the Peacemakers, became so angry that he devised a plot to kill all of the Jewish people in the land, which would of course include Mordecai and Esther. Haman lied to King Ahasuerus by telling him that the Jewish people did not obey the king’s laws. They obeyed their own laws instead. He told the king that he would agree to pay 10,000 talents of silver to the people who would kill the Jews, so the king agreed.

But, Esther knew we needed to be Peacemakers. She understood now why God had made her the queen. Esther prayed all night that God would protect her when she went to the king.

In the mean time, Haman had devised another plot. He built a gallows so that he could hang Mordecai. So you see, Haman definitely was not one of the Peacemakers, which means he was not a Christian.

The next morning Queen Esther got up, dressed in a very beautiful gown, and went in to stand before the king. King Ahaseurus was in court and did not like to be interrupted, however, when he saw his lovely queen standing there waiting to talk to him, he smiled and held out his scepter to her. Queen Esther went in and bowed before the king.

“Tell me, Queen Esther, what do you want to talk with me about,” said the king. Because Esther was one of the Peacemakers, she was very careful about the way she approached the king. She asked the king if he and Haman would come to a banquet that she would prepare for them. At the banquet she would tell the king what she desired.

That night, King Ahaseurus was so troubled, that he could not sleep. He got up and decided to read the book of the records of everything that had gone on in his kingdom. As he was listening, his servant read about Mordecai uncovering a plot to have the king murdered. Because of Mordecai, the king was saved from harm.

“What honor has been given to Mordecai for saving my life?”

“Nothing,” his servant replied.

The next day before the banquet, Haman was in the courtyard waiting to speak to the king about hanging Mordecai on the gallows.

“Haman,” said the king, “What shall be done for the man whom the king delights to honor?”

Haman thought in his heart, why the king must be talking about me. “Let a royal robe be brought which the king has worn, and a horse on which the king has ridden, which has the royal crest placed on its head. Then let this robe and horse be delivered to the hand of one of the king’s most noble princes that he may array the man whom the king delights to honor. Then parade him on horseback through the city square, and proclaim before him: ‘Thus shall it be done to the man whom the king delights to honor!’”

“Very good,” said the king, “Go and do all of that for Mordecai.”

No, thought Haman, it can’t be! I was going to ask the king to let me hang Moredecai, and now instead, I have to parade him all over the city and proclaim, "Thus shall it be done to the man whom the king delights to honor."

This man only did this because he hated them and wanted them to be killed. As a matter of fact, he had also built a gallows to have Mordecai, the Jew, hanged.

The king was outraged. “Who would do such a thing?”

“This enemy is this wicked Haman sitting right here at the banquet table,” said Esther.

Haman ran to Queen Esther and begged her to help him. King Ahasuerus was so angry, that he commanded that Haman was to be hung on the very same gallows that Haman had built for Mordecai.

So, you see, because Esther thought more of God and His people, than her own life, God saved her life, and used her to save all of his people. Yes, indeed, Esther was one of the Peacemakers.


Blessed are the Peacemakers, for they shall be called sons of God.

Next: Blessed are the Persecuted

Blessed Are the Peacemakers

Blessed are those who are Persecuted