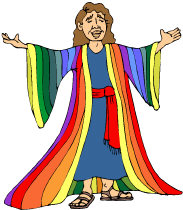 In this Beatitude, Blessed are those who are Persecuted for Righteousness' Sake, we will be looking at the life of Joseph, who was sold into slavery by his own brothers, sent to prison because of a lie, and eventually brought to great honor. So, how did he respond when he saw his brothers again after they sold him to be a slave?

Blessed are those who are Persecuted for Righteousness’ Sake, for theirs is the kingdom of heaven.
Matthew 5:10, NKJV

Jacob had twelve sons, but his favorite son was Joseph. As a matter of fact, he would buy Joseph special presents and gifts that his brothers did not receive, like a coat of many colors. This, of course, made his brothers very angry.

One day Jacob sent Joseph to check on his brothers who were feeding their flocks in a field a long way from their tents. His brothers saw Joseph coming from far away. “Here comes that dreamer, Joseph,” his brothers said. “Let’s kill him and put his body in a pit, and tell father that some beast attacked him.”

So, early in his life, Joseph was already being Persecuted. But Reuben, his oldest brother did not want them to kill Joseph. "Here come some foreigners; let’s just sell him to them as a slave. Then, we’ll take his coat and dip it in blood, and tell father that we found his bloody coat. Father will assume that he has been killed.

And, that is exactly what they did! In spite of his cries for help, his brothers sold him into slavery, to a group of foreigners going down to Egypt.

When the brothers returned home with Joseph’s bloody coat, his father, Jacob, grieved for his son for many days. His sons tried to comfort him, but he refused to be comforted.

So, was that the end of Joseph’s troubles? I’m sorry to say, that his troubles had only just begun, he would still be Persecuted more.

First, Joseph was sold to Potiphar, an officer of Pharoah and captain of the guard. Potiphar noticed that Joseph was blessed by God. He was so successful that Potiphar put him in charge of all his things. God blessed Potiphar while Joseph was there. Soon, however, things were going to change.

She was so upset with Joseph that she lied about him to her husband. She told Potiphar that Joseph had tried to attack her, and had left his garment with her. Potiphar was furious. He believed his wife, and threw Joseph into prison.

While in prison, Joseph told two of the prisoners what their dreams meant. And, what he told them came true. Years later, when Pharoah was disturbed by bad dreams, one of the men, who was now back serving Pharoah, remembered Joseph. When he told Pharoah that Joseph had told him the meaning of his dream, and that it had come true, Pharoah called Joseph out of prison, and asked him to tell him what his dreams meant.

Now, do you think that Joseph would no longer be Persecuted? Well, let's see!

Pharoah looked at Joseph and said, “You are a wise man. You alone, could tell me the meaning of my dreams. I will put you in charge of saving and storing the food and grain during these seven years, so we will have enough to eat in the seven bad years."

So, finally, Joseph not only was out of prison, but he was one of the most powerful men in all of Egypt!

Everything happened just as God had shown Joseph it would. Joseph stored up food and grain to last during the seven bad years. Other countries around Egypt, however, did not know the famine was going to come, and hadn’t saved any food or grain.

So, when the countries around Egypt began to run out of food, they went to Egypt to buy food.

Jacob and his eleven remaining sons ran out of food in Canaan. When he heard there was food in Egypt, Jacob sent the ten older brothers, but not Benjamin, the youngest, to Egypt. He would not let Benjamin go because he was afraid he would be killed like Joseph had been.

So the brothers went down to Egypt to buy grain. Guess who recognized them? You’re right, Joseph recognized his brothers immediately. They, however, did not recognize him, as they were not expecting him to even be there.

Joseph treated them roughly and asked about their family. They told him about their father, Jacob, and their brother, Benjamin. Joseph sold them the grain they needed, but kept his brother, Simeon, in Egypt. He accused them of being spies. If you are really not spies, then bring your youngest brother with you when you come back to Egypt, and I'll know you are telling the truth.

Now the brothers were terrified. They thought God was punishing them for what they had done to their brother, Joseph, years before.

When the brothers returned to their father without Simeon, and told him what had happened, Jacob was very upset. Why did they even tell the man that they had a younger brother? He told them that he would not allow them to take Benjamin back to Egypt with them.

So time passed, and Jacob and his sons again ran out of food. “Go back to Egypt and buy more food,” he told them.

“Father, we can’t go back unless we take Benjamin with us,” Reuben replied.

“Absolutely not,” cried Jacob. So the brothers did not return to Egypt.

Finally, one day, their father told them they must go back and buy food or they would all die.

“We cannot go back to Egypt without Benjamin,” they said.

Their father relented. He was very sorrowful when all of his sons, including Benjamin left for Egypt again.

The brothers were really frightened when they heard that this was Joseph. Now what would Joseph do to them because of the evil they had shown to him? Would they be Persecuted for the evil they had done to him?

But, Joseph, who had been Persecuted for Righteousness,’ Sake, was a child of the kingdom of heaven. “No,” he said. “I will not punish you. You meant it for bad when you sold me, but God meant it for good.”

You see, if Joseph had not been there, the whole family would have starved to death in Canaan, because Egypt would not have known about the coming famine, and would not have saved grain and food.

When Pharoah heard the news that Joseph’s brothers had come, he told them to go back to Canaan and bring their father, and they all could live in Egypt.

Can you imagine how Jacob must have felt when the brothers returned with the news? When Jacob returned to Egypt and saw Joseph, he hugged him and just wept.

Joseph was Persecuted for Righteousness’ Sake, but because he was wise and humble before God, God blessed him and saved Jacob and all of his brothers from starvation.

Do you remember what we learned in the Beatitude, Blessed are the Meek? When evil things happen to us, we must trust in God. He alone, will save us and protect us. Joseph never was angry with his brothers, because he could see that it was God’s plan all along for him to come to Egypt and to save his family from certain death. Even when he was being Persecuted, Joseph never complained to God.

But what about us? If we were Persecuted as Joseph had been, would we complain to God and to others about how unfair we were being treated. Would we, like Joseph, remember that even if we were being Persecuted for Righteousness' Sake, God would take care of us.

We must always pray to God to help us. For, without God's help we would grumble and complain every time we felt like we were being Persecuted -- even if it was really our own fault.

Blessed are those who are Persecuted for Righteousness’ Sake, for theirs is the kingdom of heaven.

This brings us to the end of the 8 Beatitude Devotions for Children. The Beatitudes end with these verses:

“Blessed are you when others revile you and persecute you and utter all kinds of evil against you falsely on my account. Rejoice and be glad, for your reward is great in heaven, for so they persecuted the prophets who were before you.”

Blessed are Those Who Are Persecuted