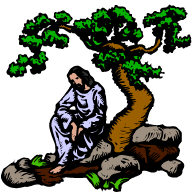 What does it mean to mourn? In this devotion for children, we follow the disciple, Peter. as he faces the greatest trial of his life. He thought Jesus would be with them forever, but God had an even better plan!

4 Blessed are those who mourn,
For they shall be comforted.
(Matthew 5:4, New King James Version)

Peter and the disciples loved Jesus. They would do anything for him. But, one time when Jesus and his disciples were sitting together at the table, the disciples began to argue about who was the greatest in the kingdom of heaven.

Jesus told them, “He who is greatest among you, let him be as a servant, and he who serves, as one who governs. Jesus told the disciples that soon he would be lifted up on the cross, and his disciples would deny him.

Jesus sighed as he turned to Peter. "Oh Peter, before the rooster crows, you will deny me three times."

“No,” said Peter, “Even if I have to die with You, I will not deny You.”However, as the night progressed, it became obvious that things wouldn’t go as Peter predicted. Jesus went to pray in the Garden of Gethsemane. When He rose up from prayer he discovered that his disciples had all fallen asleep.

Jesus called to them, "Get up and pray, so you won’t enter into temptation."

Just then, they heard several voices, and saw lanterns shining through the trees. Imagine their surprise when they saw Judas with a great many people, including priests and elders, coming with swords and clubs in their hands. Judas walked up and kissed Jesus.

Jesus said to them, “Have you come out against me with swords and clubs, like I’m a robber. I’ve been sitting with you every day, and you didn’t grab me then."

The disciples couldn’t believe what was happening. They were all so afraid that they ran away as fast as they could run!

The men who had grabbed Jesus led him away to see the high priest while Peter crept at a safe distance behind them. Jesus was being treated like a criminal. Peter knew Jesus had done nothing deserving of death, but that is what the chief priests and pharisees wanted.

Later, Peter lingered nearby in the courtyard, when a servant girl came up to him and said, "You were with Jesus. I saw you.”

“No way,” said Peter. “I don’t have any idea of what you are talking about." He was afraid they would want to kill him, too.

You know, that’s just the way we are tempted to be when our mother or father catches us doing something wrong. We want to deny it and blame it on someone else.

Peter quickly left and went out to the gateway when another servant girl came up to him again, and said, “This fellow also is with Jesus of Nazareth.”

Then, a little later, more people standing nearby said to Peter, “Surely you also are one of them, for your speech betrays you.

”Now, Peter began to curse and say, “I do not know the Man!

”Immediately, the rooster crowed. Jesus turned and looked at Peter, and Peter remembered what Jesus had said to him. “Before the rooster crows, you will deny me three times.

”Peter ran away and cried bitterly. Peter mourned because of the greatness of his sin. True mourning as meant in this beatitude, means being overcome with grief over our own sins, and desiring with all our hearts to not sin.

Jesus called to the disciples and told them to come and eat breakfast with him. After breakfast, Jesus looked at Peter and said, “Peter, do you love me?”

Peter said, “Yes, Lord, you know I love you.

Peter said again, “Yes, Lord, you know I love you.”

Jesus said, “Tend my sheep.” Then Jesus said to Peter a third time, “Peter, do you love me?”

Peter looked at Jesus a little irritably and said, “Lord, you know all things. You know that I love you.”Jesus said, “Feed my sheep.”

Mourning can mean many things. We think of mourning when a friend or a relative dies. We miss them terribly!

In the beatitudes, however, Jesus is talking about the true mourning over our sins, which separates us from God. Thankfully, Jesus has paid for those sins by dying on the cross for us. We find that we are righteous before God, not because of what we have done, but because of what Jesus has done for us. When we fall on our faces before God, accepting the Lord Jesus Christ as our only Savior, we are truly mourning our sins and looking to God, who alone can save us.

Blessed are those who mourn, for they shall be comforted.

They feel their guilt and failures and helplessness, but are honest about them and are grieved, which drives them to God, who is their only help and the only one who can truly comfort and forgive them.

Next: Blessed are the Meek

Blessed Are Those Who Mourn

Blessed Are the Meek