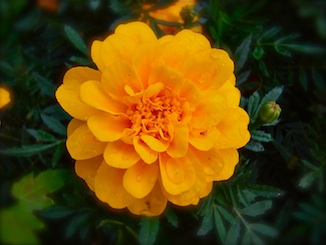 Gloom and Doom! How humiliating! After parading Mordecai around the city as one honored by the king, Haman hurried to his house, mourning and with his head covered. Things definitely do not look good for Haman!

12 Afterward Mordecai went back to the king’s gate. But Haman hurried to his house, mourning and with his head covered. 13 When Haman told his wife Zeresh and all his friends everything that had happened to him, his wise men and his wife Zeresh said to him, “If Mordecai, before whom you have begun to fall, is of Jewish descent, you will not prevail against him but will surely fall before him.”14 While they were still talking with him, the king’s eunuchs came, and hastened to bring Haman to the banquet which Esther had prepared.

How humiliating! After parading Mordecai around the city as one honored by the king, Haman hurried to his house, mourning and with his head covered.

Remember how supportive Haman's wife and friends were in suggesting that Haman build a gallows for Mordecai? Look at what they are saying now!

“If Mordecai, before whom you have begun to fall, is of Jewish descent, you will not prevail against him but will surely fall before him.”

And so, the prophecy of Haman's fall is made! But, before they even had time to make plans, or discuss the matter, Haman was rushed off to the palace to have dinner with King Ahasuerus and Queen Esther.

How often do we think, when we are in the middle of something, that we already know what will happen? How many people do we judge unfairly because we make assumptions about what they will say or do? How often do we feel discouraged or depressed because we have convinced ourselves that we know what is going to happen?

Too often, our trust rests in ourselves and those around us. How little we put our trust in the Lord who, alone, knows how the matter will end. Only the Lord God can move the hearts of people and change the events of our lives. And yet, we are often more concerned about what our friends think than what God thinks.

What a great example we have in Queen Esther and Mordecai. Though things looked bleak, as it seemed a sure thing that the Jewish people in the land would be annihilated, they did not try to develop a plan of their own, but rather, went to God in prayer.

God moves in the hearts of people--even in those who have no knowledge of Him! Just think of that! Our God knows us in the innermost parts of our being, and can work in the hearts of those around us to bring about His will.

What do you do when things seem hopeless? Do you gather with your friends and plot out a plan of attack? Or, do you turn to Christ, who alone, is your only advocate. As a Christian, you are never out of the realm of the power of God; He loves you as no other can, and His working in your life is always for your growth in Him, and to advance His kingdom on the earth.

That kingdom will come! For those not saved it will truly be a day of gloom and doom!

Will it be a day of gloom and doom for you?

Next: End of Haman