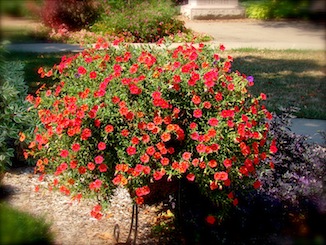 God called for a worthy sacrifice, but why did that have to mean his only son? Abraham must have pondered that question as he walked up the mountain with his only son, Isaac.

17. By faith Abraham, when he was tried, offered up Isaac: and he that had received the promises offered up his only begotten son,

18. Of whom it was said, That in Isaac shall thy seed be called:

19. Accounting that God was able to raise him up, even from the dead; from whence also he received him in a figure.

8. And Abraham said, My son, God will provide himself a lamb for a burnt offering: so they went both of them together.

9. And they came to the place which God had told him of; and Abraham built an altar there, and laid the wood in order, and bound Isaac his son, and laid him on the altar upon the wood.

10. And Abraham stretched forth his hand, and took the knife to slay his son.

11. And the angel of the LORD called unto him out of heaven, and said, Abraham, Abraham: and he said, Here am I.

12. And he said, Lay not thine hand upon the lad, neither do thou any thing unto him: for now I know that thou fearest God, seeing thou hast not withheld thy son, thine only son from me.

13. And Abraham lifted up his eyes, and looked, and behold behind him a ram caught in a thicket by his horns: and Abraham went and took the ram, and offered him up for a burnt offering in the stead of his son.

As we continue our study of Hebrews 11, the Great Hall of Faith, we again look at Abraham. Verse 17 says, By faith Abraham, when he was tried, offered up Isaac. In our 21st century culture, Genesis 22 truly seems barbaric to us. Yet, in the pagan cultures surrounding Abraham, it was not unusual for the people to offer human sacrifices to their gods.

Think of what has happened so far in Abraham's life. God has continually promised Abraham an heir through his wife, Sarah; Sarah gave birth to Isaac when she was 90 years old; and God promised Abraham that his descendants would come through his son, Isaac. Now, God was calling Abraham to offer up his only son as a worthy sacrifice! Did Abraham really believe that he would be required to kill his son Isaac? Isaac, on the way to the place where they would build the altar for sacrifice asked his father, where is the sacrifice? Abraham answered simply, God will provide himself a lamb for a burnt offering.

We can not really know what was going through Abraham's mind, we can only speculate. But, we do know that Abraham had faith that God would keep his promises. Either God would bring Isaac back to life or He would provide a worthy sacrifice som other way. We know the rest of the story, but Abraham did not.

It is obvious from this passage that Abraham lived and breathed his faith in God; nothing that he did was without the awareness of God's continual presence, and even when God asked for his son Isaac to be a worthy sacrifice, Abraham's faith did not waiver.

How about your faith? How many times throughout the day do you make your decisions based upon the sensible awareness that God is right there beside you? Is God just a part of your life, or is God all of your life?

Pray today that God would grant you the faith that you would have an awareness of His presence with you throughout this entire day!

God offered up His Son, His only Son, the Lord Jesus Christ as a worthy sacrifice to pay the debt for our sins. How much we owe Him; it is a debt we can never truly pay.