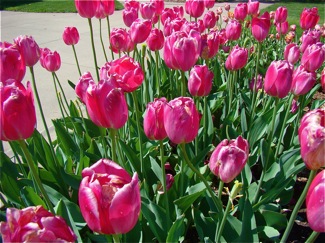 The decree had gone out that all of the Jews were to be exterminated, and the city of Shushan was in shock. The Jewish people throughout the country were in sackcloth and ashes, praying to God for His deliverance. Mordecai was so distressed that he went as far as the front of the king's gate, in sackcloth and ashes and cried out to God.

1 When Mordecai learned all that had happened, he tore his clothes and put on sackcloth and ashes, and went out into the midst of the city. He cried out with a loud and bitter cry. 2 He went as far as the front of the king’s gate, for no one might enter the king’s gate clothed with sackcloth. 3 And in every province where the king’s command and decree arrived, there was great mourning among the Jews, with fasting, weeping, and wailing; and many lay in sackcloth and ashes.

4 So Esther’s maids and eunuchs came and told her, and the queen was deeply distressed. Then she sent garments to clothe Mordecai and take his sackcloth away from him, but he would not accept them. 5 Then Esther called Hathach, one of the king’s eunuchs whom he had appointed to attend her, and she gave him a command concerning Mordecai, to learn what and why this was. 6 So Hathach went out to Mordecai in the city square that was in front of the king’s gate. 7 And Mordecai told him all that had happened to him, and the sum of money that Haman had promised to pay into the king’s treasuries to destroy the Jews. 8 He also gave him a copy of the written decree for their destruction, which was given at Shushan, that he might show it to Esther and explain it to her, and that he might command her to go in to the king to make supplication to him and plead before him for her people. 9 So Hathach returned and told Esther the words of Mordecai.

The decree had gone out that all of the Jews were to be exterminated, and the city of Shushan was in shock. The Jewish people throughout the country were in sackcloth and ashes, praying to God for His deliverance. Mordecai was so distressed that he went as far as the front of the king's gate, in sackcloth and ashes and cried out to God.

Mordecai explained everything, including the fact that Haman was putting in large sums of money into the king's treasuries so that all of the Jews might be destroyed. As proof, he sent with the eunuch a copy of the decree issued for their destruction, and asked that he plead with Esther to go before the king and plead for the lives of her people.

Things really went from bad to worse very quickly, did they not? What a hopeless situation! What was Esther to do? The king did not know that she, too, was a Jew. How would he react when he heard the news?

It is interesting to note, that when the Jews were desperate, they returned with one accord to God, crying out to Him for help in sackcloth and ashes. Sackcloth and ashes were used to demonstrate their utter humility and helplessness before God.

Did you know that we do the same thing? Oh, I don't mean we wear sackcloth and ashes, but it is easy to let our Christian life slide while everything is going just fine. When life turns around so that we see nothing ahead but grief and trouble we quickly turn back to the Lord. That is not a bad thing; actually, it is the right thing to do.

Have you ever thought that maybe that is part of the reason that God allows troubles to come upon His people? Throughout history, it has been evident that the true church of God grows the most during times of great persecution! Maybe it is a sackcloth ashes time for us as well!

In many countries, we see that Christians are becoming so much like the world that it is hard to tell the difference. Apathy and indifference seem to permeate the churches of God.

How about you? Are you content to just sort of live the Christian life with one foot stepping over the line? Are you embarrassed to be different? Do you just want to be part of the "in" crowd?

Unfortunately, the temptations you face now will trouble you all of the days of your life. As a matter of fact, the less you face them and deal with them now, the more difficulties you will have later.

Go to Christ; ask Him to be gracious to you. Ask Him to give you great contentment and joy in your Christian life, and the ability to boldly face the world's temptations without caving into their ideals. Then, thank God for His help. Remember, it is not you who has the power to live the Christian life victoriously, it is the power of Christ within you that gives you the victory.

Next: If I Perish