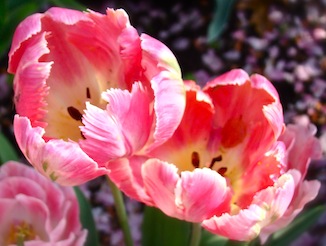 34 The battle increased that day, and the king of Israel propped himself up in his chariot facing the Syrians until evening; and about the time of sunset he died.

2 Chronicles 18 tells us of the remarkable story of the answered prayer of Jehoshaphat. Prior to this passage Micaiah, the prophet of God, prophesied that Ahab, King of Israel, would be killed in battle. Not believing the prophecy of Micaiah, Ahab disguised himself as just a regular Israelite soldier, while Jehoshaphat, King of Judah, went out to the battle in the full array of a king. The king of Syria had commanded his men to fight only with Ahab, the king of Israel. Thinking that Jehoshaphat was the king of Israel, a group of soldiers began to pursue him; Jehoshaphat cried out to God for help, and the soldiers were diverted by God. Then, a random, a Syrian soldier just happened to shoot an arrow which struck Ahab between the joints of his armor; around sunset Ahab died as Micaiah had prophesied.

There are many lessons for us to learn from this prayer of Jehoshaphat, but there are two in particular that I would like to mention. Prayer to God does not have to be fancy or formal. Here was Jehoshaphat in the midst of the battle when he was suddenly attacked by a group of soldiers. He immediately cried out to God for help, and God diverted the men. How did God do that? I don't know! God is always available to help us, even in the midst of a disastrous event. We are never too far away to reach Him, as He is always at our side.

Ahab, who did not serve the Lord was not overly troubled by the prophecy of Micaiah. However, just in case Micaiah was right, Ahab sought to trick God. If he was not arrayed in his kingly robes, no one would know where he was. Actually this was true; the soldier who shot the arrow that killed Ahab was not even aiming at him. In addition, he was not aware that he had just struck the king of Israel.

God does not run His train on our train track! What He ordains will come to pass; there is nothing we can do to divert His will. Just think of that! What a wonderful promise to the Christian; we are always under the protection of God.

Go today in the confidence of the guiding and protecting hand of God in your life as you remember the answered prayer of Jehoshaphat.